Viggo passed away at the age of 9, he will be forever missed he was a very special loving boy.

Viggo finishes his championship with 4 majors, he wins best of winners and Jackie wins winners bitch

VIGGO WENT TO THE NATIONAL SPECIALTY IT WAS HIS FIRST SHOW, HE WON FIRST PLACE IN THE 6 TO 9 MONTH PUPPY CLASS AND SECOND PLACE IN THE SWEEPSTAKE CLASS.

VIGGO IN ACTION AT THE SPECIALTY 6 MONTHS

Diego passed this spring 2014 at the age of 9 1/2 from cancer.
He was the best dog we ever had and will always be in our heart. We
see his great temperament and beauty in his daughters and grand daughters we have at home with us.

Diego wins the Veterans Class at the 2013 specialty 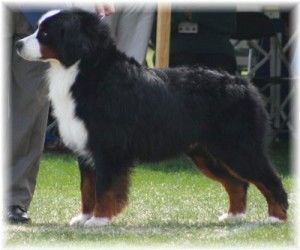 Diego with his half-sister Blaze

Kelsey on the left at 6 weeks

We sadly lost this great boy at 10 1/2 years. We was a wonderful dog and missed by many. Hunter was co-owned and lived with Brad and Mirna in Carmichael California.  Hunter earned his Swedish championship in 3 shows, he was awarded the highest scores of Excellent on his 3 championship cards. Hunter bred 5 girls in Sweden and currently has 3 litters in Europe. Watch for Hunters kids in the show ring in Europe

Hunter at 6 years in Sweden

Hunter at the American national specialty in 2010 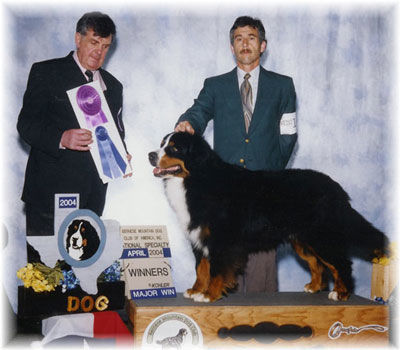 Austin came to us from Norway when he was 8 weeks old. He was imported from the Milkcreek Kennel. Austin has produced excellent orthopedics and added a drafty European style of Bernese to his offspring. He has been a big asset to our breeding program. Austin is a top producer of working title dogs and Champion title dogs. We lost Austin at 10 years 3 months, October 2011. His cause of death was inclusive, but Lymphoma was suspected. Austin was such a special boy he will be missed dearly.

Harley at 8 weeks
Harley died at 4 years when she developed a pulmonary embolism while whelping her last litter
we will forever remember her, she is our longest line we started with her great, great grandmother, everyone is her mothers lines lived from 11 to 14 years. She gave us a beautiful daughter to help carry on with, we know you are watching over her now.

Rose passed away in September 2010 at the age of 9 years and 8 months. She leave us with her wonderful children- Hunter, Diego, Chelsea and many grandchildren. Rose will forever be in our hearts.

Rose finishing her championship at 17 months

Rose showing at the specialty, she won 1 place brood bitch
and best veteran when she was 8 years

Rose at her 9th Birthday

Rose came from Norway to live with us at 3 months of age, she came to us from our friend and breeder Maija Anestad,
the Milkcreek kennel, to her we will always be grateful for our wonderful girl Rose and all she added to our Bernese family.

Lived with Sue in Montana, she was a very healthy girl until she passed of old age at 14 years

Lived with Sue in Montana

Sky died of lymphoma at 7 years

Cally lived with grandma in California

We are sad to say that we lost Cally this April, Cally was 11 Years old and my mother’s
best doggie friend for the last 10 years. She will be very missed. Cally died from lymphoma

Dakota and Morgan his brother won many brace awards, they were beautiful together

We lost Dakota to hemolytic anemia at 7 years.

We lost Dylan at 10 years

We lost Casey at 10.5 years to Lymphoma

Rita earned her breed ring championship and Obedience CD
she was a hard working girl, she also did carting

Jody passed of cancer at the age of 9 years

We lost Charlotte at 6.5 years due to complications during her spaying.

We lost Crissa at 10 years to Myasthenia Gravis

We lost Sarah at 10 years

We lost Sweety at 12 years 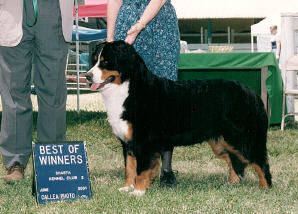 Jules was lost at 7 years to cancer.

Bonnie was lost at 5.5 years due to lymphoma

A Melody and Austin Daughter

We lost Raven at 5 years on July 17th, 2008 due to a blood clot she developed during her c-section for her third litter.

Lived with Sue in California and passed of bladder cancer at the age of 8.5 years

Eva Lived with Chris and Erin Ochoa in Davis CA

Eva passed of Cancer at the age of 6

Bella lived with my mother and passed away at the age of 11 years
she will be greatly missed, she was her constant companion.

Paris lived with Cindy and John

Reba finishing her championship at 2 years

Kate is  lived with Marc and Wendy